If you are a football fanatic and a devout Florida Gator supporter, you know well enough what it means to have a community that stands behind your favorite team. The Gator community is expanding, and it’s overwhelming to see followers sporting the Florida Gator jersey, swelling the stadium, pubs, and streets cheering for the Gator Nation. After all, a team is incomplete without its fans!

It’s been over a century since The University of Florida is playing football. But with Steve Spurrier’s return, it was only in the nineties that Team UF came to the top. But the fans stand by the team no matter what! That’s what true fandom is all about. However, fandom is nothing without some traditions that are fun and crazy and scream out your madness for the Gator Nation.

1. You Must Know The Fight Song

What’s the fun in cheering for your team without having a song that binds all the fans into one community and telling the world where your loyalties lie. If you are a passionate supporter, the University of Florida fight song “Orange and Blue!” is a must-know. And, as a true Florida Gators fan, put on your UF gator gear and hum along with the song in unison.

So give a cheer for the Orange and Blue
Waving Forever!
Forever pride of Old Florida,
May she droop never.
We’ll sing a song for the flag today,
Cheer for the team at play!
On to the goal,
We’ll fight our way for
Flor-i-da!
Go Gators!

2. The Mandatory Selfie with the Team Mascot

The football season can’t get over without the traditional photo with the team mascots Albert and Alberta. Albert Einstein Gator and Alberta Gator are the official mascots of the Gator Nation. The history of the mascot goes back 100 years when an alligator was chosen as the symbol for the team. It all began with Albert, and it was only in 1986 that Albert’s friend Alberta was introduced. And, since then you can see the couple every time there is a match or a social event. So, if you are an ardent supporter, sport the Florida Gator apparel and get clicked with Albert and Alberta.

3. Know and Chant All the Slogans

Chanting the slogans in one voice can give you a strong feeling of camaraderie. And, every team has its unique slogans that all the fans are familiar with. Supporters shout “Orange” and “Blue” back and forth to each other. As fans, you must know that these are the official colors of the team. Besides, George Edmondson gave “Mr. Two Bits” to the fans forever. The story goes back to 1949 at Florida Field when the Gators were performing poorly against The Citadel, and sadly, the fans started booing. That’s when George Edmondson came up with “Two bits! Four bits! Six bits! A dollar! All the Gators, stand up and holler!”

Since the 1920s, “We Are The Boys” is a popular song for Team UF. So, the tradition is that just before the third quarter ends and the fourth begins, the fans stand and lock their arms to sway to “We Are the Boys.” Here’s how the song goes.

We are the boys from old Florida,
F-L-O-R-I-D-A.
Where the girls are the fairest,
The boys are the squarest …
Of any old state down our way.
We are all strong for old Florida
Down where the old Gators play.
In all kinds of weather …
We’ll all stick together for …
F-L-O-R-I-D-A.

If you are a true fan of Orange and Blue, you must know the famous Gator Chomp. It’s the most iconic tradition, where you extend your right arm over your left and imitate an alligator’s chomp motion. Did you know that collegemagazine.com rated the Gator Chomp among the top 10 college football traditions? So, in the coming football season, sport your favorite Florida Gator jersey and chomp away! 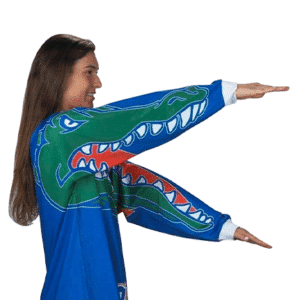 The home stadium of the Florida Gators is the Ben Hill Griffin Stadium, popularly known as The Swamp. The team always has an advantage on its home grounds, with thousands of fans swarming the stands and cheering for the team showing off their UF Gator gear.

Nothing is complete without knowing the University of Florida Alma Mater. Once the team wins, this is how the fans celebrate.

Florida, our Alma Mater
Thy glorious name we praise
All thy loyal sons and daughters
A joyous song shall raise
Where palm and pine are blowing
Where southern seas are flowing
Shine forth thy noble Gothic walls
Thy lovely vine clad halls
‘Neath the Orange and Blue victorious
our love shall never fail
There’s no other name so glorious
All hail, Florida, hail.

If you are an old student or an alumnus, you already know these traditions. But, if you are just getting oriented to the University of Florida, you should know some of these to be a part of the Gator Nation community. Get your own Florida Gator Jersey and join the craziness.